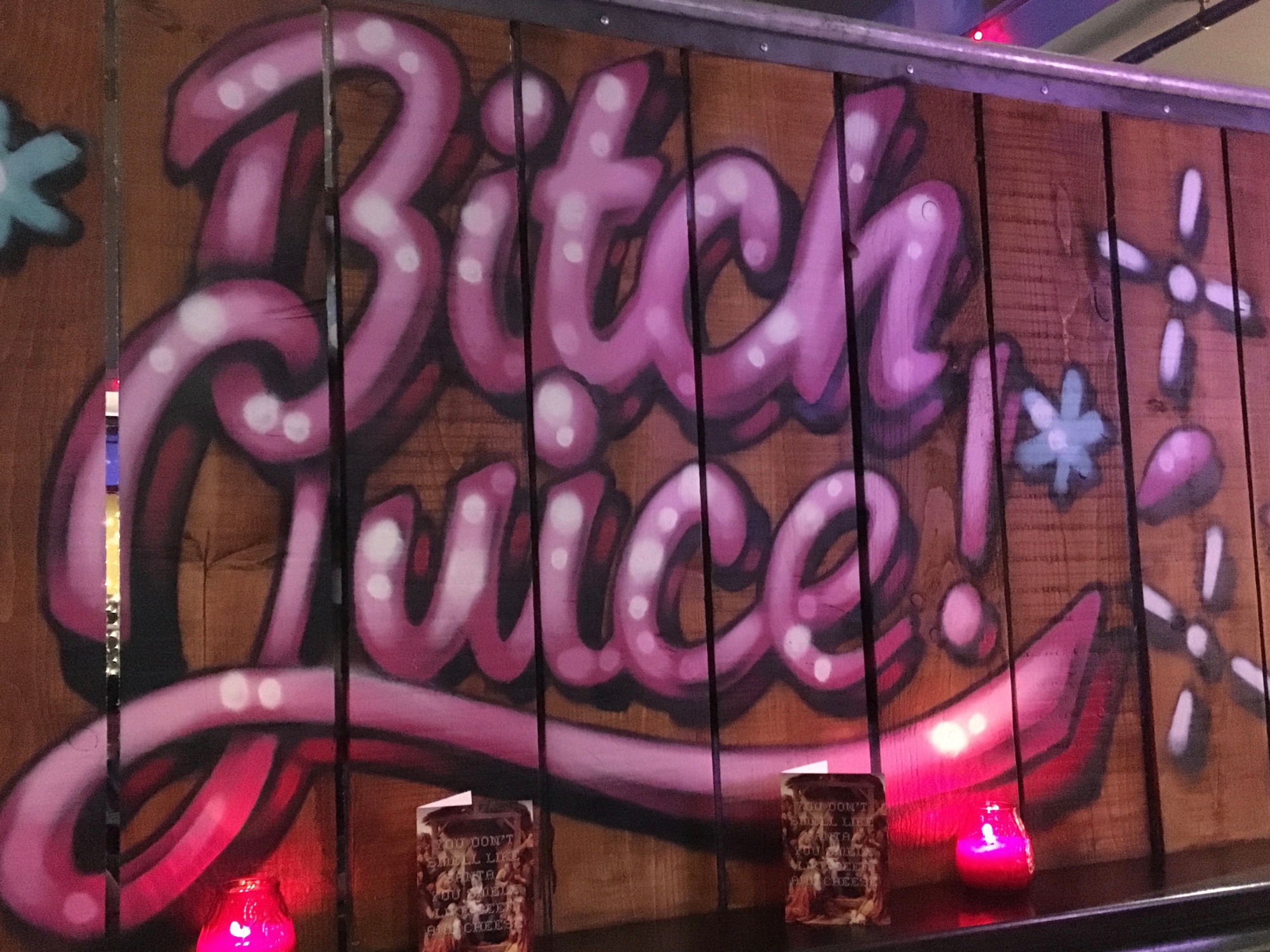 First time out for an evening in Liverpool in a long time! I used to go out here in my late teens and early 20s and it was a totally different place then. Was with my sister and brother-in-law, Mhairi and Thom. They suggested we come here for two reasons; firstly, it was Christmas party season and as you can’t book there was a good chance of getting a table and secondly they don’t seem to be able to get enough of this place.

We had already been for a cocktail at Berry and Rye, an awesome little speakeasy, prior to getting there and decided to continue along that route by starting with a Mallow dip (£7.50) a mixture of vodka, strawberry liqueur, lemon, pineapple and toasted marshmallow stock. Sounds amazing doesn’t it?  Which is why I went for it, even though my sister warned me off it. It was hugely disappointing. It tasted like yogurt. By that I mean plain yogurt.  Not really what I had in mind to have as a yummy treat. My sister had a Haribo Smash (£7.50) which had vodka, apricot, strawberry candy, lime, orange, lemon and mint. It was delicious and sweet and fruity. Right up my street. A much better choice. Thom had an After Eights boozy milkshake (£5) with vodka, melted after eights, ice-cream, crushed cookies and after eights. Also delicious and Thom raved about it [it’s more manly than it sounds – Editor]. I had significant cocktail envy.

Both my sister and I went for the Triple Nom (£9). I largely went for this as a direct comparison to the best burger I have ever had, which also contained the same components. Beef patties, cheese, pulled pork, coleslaw, BBQ sauce and, in this case, their ‘famous’ sauce. It was a delicious burger, really tasty, the pulled pork was amazing with a lovely bbq flavour from the sauce and went really well with the beef. I ordered some extra slaw and put more on to add extra creaminess. As I have said I enjoyed eating this burger, however, it doesn’t quite hit the high of my best burger ever. The meat was little drier in than I have had elsewhere. The most obvious way you could tell this was from the lack of a pool of juice dripping on to your plate with every bite. The BBQ sauce was also slightly more on the bitter side. Im really nit picking here, so don’t get me wrong, it was still delicious.

Thom had the butter, blood and bleu (£10.50). This was a steak burger with cheese, chorizo, onions, chilli, peppercorn and blue cheese sauces and “magic” mayo. Not sure what was magic about the mayo, but it was nice according to him [it was amazing.  I don’t know what’s in the sauce either though.  [Heroin possibly – Editor].

Now the fries were a meal in themselves, we ordered two between the three of us but they could easily have fed 4 people. The ballpark fries (£4.50) were fries with hotdog slices, pickle, ketchup and French’s mustard. Now my first few mouthfuls of this I thought “awesome” but as I went on I realised all you could taste was the mustard. You had no idea the hotdog bits were there and the pickle relish just came through as a hint. Thom agreed [I really like French’s mustard though, so whilst agreeing, I perceived it as a positive – editor]. They were nice, just a little bit heavy on the mustard maybe. The bacon bacon fries (£3.50) with bacon bacon mayo and “bacon rain” were totally amazing! Could not get enough of them! Just imagine bacon, cheese and chips. Need I say more? 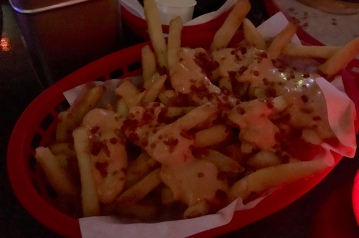 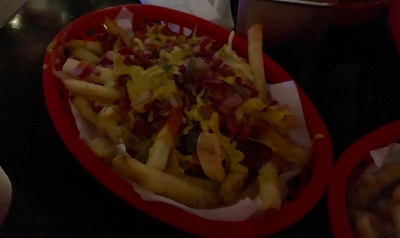 The redneck wings (£5) were great, the chicken skins were nice and crispy under the BBQ sauce. This was perfect for me as I cannot stand squidgy skin and tend to pick it off if its like that losing all the BBQ goodness. BBQ chicken wings done well.

I ordered another cocktail at this point, the Christmas Pud (£7.50) with bacardi carta oro, cherries, apricot, lemon, Christmas syrup, redcurrant and spiced cream.  It was surprisingly sweet and fresh and fruity. I expected it to be a bit more rich, spicy and dry fruit flavoured. I think part of the problem was that all of the spiced and rich flavour had gone to the bottom of the glass as the last few swigs were more like this. Was yummy either way and much better than my first choice.

My sister and I shared a dessert, we went for the Wowbun (£6) a cinnamon bun, chocolate truffle crunch patty, whipped cream and chocolate and salted caramel sauce. Sounds amazing doesn’t it? Well, I am sorry to say it was really disappointing. The truffle patty was dry, really dry. Imagine the centre of a twix without the thick layer of chocolate mashed up so all the air had gone out of the wafers and then shaped like a burger. This might have been ok if there was more sauce and cream. The bun was just a standard sweet brioche bun with a tiny hint of cinnamon. Considering how dirty their burgers are (in a good way) I expected a desert to really write home about or to be sickly if anything. Wouldn’t have it again.

It’s a shame that came at the end of what otherwise was a really nice meal. We went onward for more cocktails in the rest of the city.

As I said, with burgers there’s a lot of competition and it doesn’t quite hit my top spot but the food was great for the most part and the atmosphere and staff were lovely. I even got the obligatory “kissing the model cow” photo. Will definitely come back. So will recommend.

Please note today’s entry was edited by the infamous Thom!