Now, I have hinted when I have reviewed other burger places in Glasgow that there was somewhere else I have been where they do the best burger I have had and this is it! The first time I had their Smokey with pulled pork I thought I had died and gone to food heaven. I remember saying at the time that I have spent (insert obscene amount of money here) on dinner for my 30th (at The Fat Duck) and it wasn’t as good as this bad boy! Brioche bun, juicy beef patty, succulent pulled pork, BBQ sauce, cheese & creamy coleslaw. Drool!

For some reason, possibly because I always want to try something/somewhere new I haven’t been back to this place in a year! There was a time when I came here about once a month. I have also been raving about their burgers to my brother-in-law Thom and wanted to have the opportunity to bring him here (he lives in Cheshire) so when my family were all up for my grans 90th I took the opportunity to drag them all here for lunch!

Now after recanting tales of the mythical burger to Thom I was gutted to find that it was no longer on the menu. I wanted to cry. Oh well, another one to try it is then. I had gotten a bit stuck in my ways. Like going to new restaurants, if I do go to the same place twice I tend to want to try something different but here I had gotten stuck in a pulled pork smokey rut, but what a good rut it was. 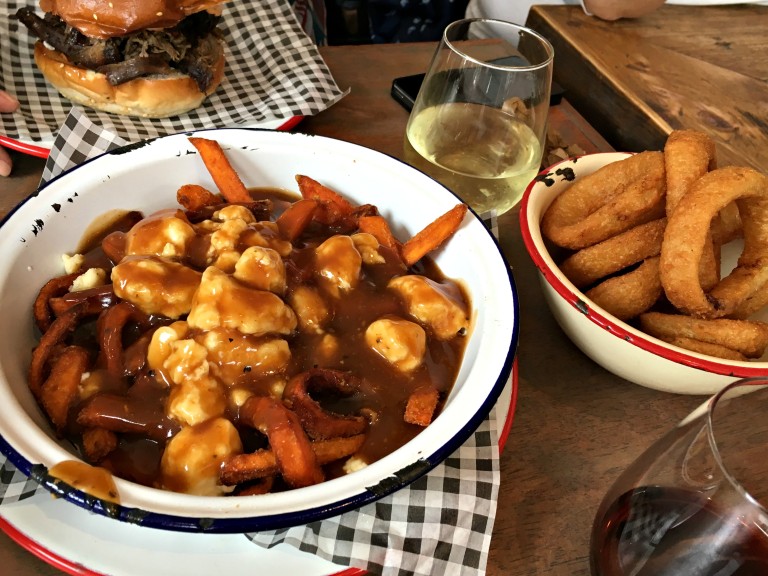 So, I had to peruse the menu again and find what I wanted to have. Well, it wasn’t hard when one tells you it is their signature burger, it also has a pretty cool name…..The Wolf of St Vincent St (£10). A beef burger made with dry aged scotch beef, american cheese, bacon, pulled pork in BBQ sauce, crispy onions and ‘Nduja mayo. It is actually pretty similar to the Smokey with Pulled pork but with mayo rather than slaw on it and with bacon on crispy onions. ‘Nduja is basically slightly spicy pork spread, so this was porky mayo. It looked filthy (in a good way), dripping with pork and cheese. It was delicious. Succulent meat, crisp bacon and onion with molten cheese and mayo adding a creaminess. Really good, but maybe not quite as good as its previous incarnation. Thom joined me in this burger and I think he thought it was pretty damn good as well.

My dad had the Spartan (£7.50) a burger made with scotch beef and “Nduja sausage with salami, tzatziki, crushed chillies, tomatoes and harissa mayo. It looked lovely and dad scoffed it but as usual I didn’t get to try any.

Mum had the Pastrami Burger (£8.50) again a dry aged scotch beef burger, swiss cheese, grilled pastrami, coleslaw and BBQ sauce. This would have been my second choice from the menu. It looked great and mum was very impressed. She gave me a little bit of the pastrami which was soft and peppery. Very good.

Lastly the little monster (my nephew, aged 3) had the Kids hot dog, a beef Hot Dog in a brioche bun. There was the option of pickles, lettuce and tomato but he has it plain. It came with a small portion of chips, a fruit juice and a scoop of ice cream for pudding, all for £6.

Then there were the sides!! We got onion rings (£3.50) which were coated in a thick batter but were crisp not floppy or greasy. We had a coleslaw (£2), I requested this as it was so good on previous burgers. So creamy and simple, just made from red cabbage. It is just great slapped on a mouthful of anything. Then there was the bacon chips (£4) fries coated with a little paprika, crispy bacon and spicy beef mayo. They had a lovely spicy kick from the paprika and yummy salty bacon cut with the creamy mayo. They were good but not my favourite, that was the sweet potato poutine!! I had their normal poutine here before and the sweet potato one was even better (£6). For those of you that have not had poutine before it is a Canadian dish of chips cheese curd and gravy. For those of you from the north of England it’s basically posh chips, cheese and gravy, that great end of a night out staple. This one had the lovely twist of being with sweet potato for an added sweetness and creamy softness to the potato. Delicious. Everyone loved it.

My nephew was the only one that got pudding (as it is included in the kids meal). He was ecstatic that he was allowed some ice-cream and that he got it in his own special bowl (a cup) with chocolate sauce. Happy little man!

Still think this is the best place to go for a burger in Glasgow. If you haven’t been then go. Just go!