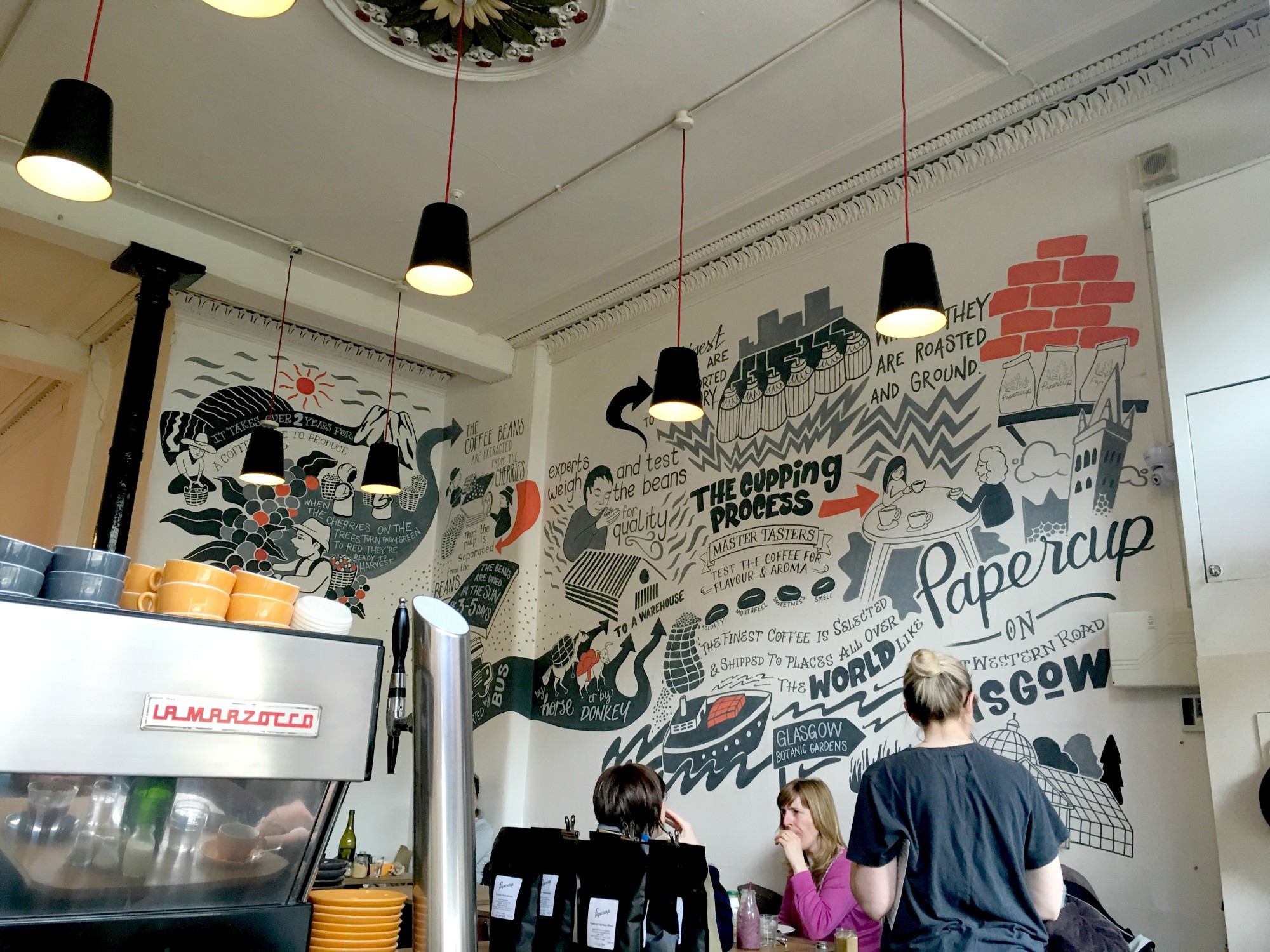 So it was a lazy morning/afternoon and I decided to go for some brunch with the lovely Mr F. He suggested that we try Papercup, as it does “the best breakfasts in Glasgow” according to him. So off we plodded to Great Western Rd and sat down in the window seat. I loved how bright and airy the place is, the coffee related mural on the wall and the variety of clientele from the students on their laptops to the elderly lady on home oxygen.

First came the drinks order and Mr F had a latte (£2.50), as someone who loves the taste of coffee I asked if they had decaf. I know, I know! How can you say you love coffee and drink decaf. I used to drink tonnes of the stuff, a bit too much, and after one particularly stressful night shift and my like, 10th coffee I felt so ill and shaky and unable to think straight (something I really need in my job), I thought enough is enough. I have been pretty much caffeine free since then. I do have the occasional caffeinated tea but even then I start to feel jittery after the second or third cup and one caffeinated coffee is a sure fire way to make me feel genuinely ill for a few hours these days and last took the hit to have a cup of (responsibly sourced, not farmed) Kopi Luwak that I bought my brother-in-law for Chirstmas at £40 per 250g plus p&p I had to try a cup and it was gorgeous but I’m not sure worth the headache that ensued. I am a bonefide caffeine lightweight now, but feel generally so much better for it, I had a coffee problem. So, I politely asked for a decaf and was met with a look of disgust like I had just gone to the bathroom on the floor. “No, we don’t do decaf.” Ok then, guess I deserved that. Maybe coming to somewhere that prides itself on world class coffee. I know it removes flavour in the process, but there are ways to do it with less loss of flavour (the swiss water process) and allows people who feel ill with caffeine to have a bit of the coffee flavour joy. There is a little coffee shop right by my flat that does lovely pastries and cakes and I would love to sit and read and write for a few hours in there, but they only do builders tea for a huge price (which I begrudge paying the mark up when I can have a like 5p tea round the corner at home) and not even hot chocolate. I would totally go more if they just did decaf. I don’t mind paying a few quid for a coffee, or a fancy tea. Ok, rant over. Please don’t hate me for not being able to hack proper coffee.

So my chai tea ordered (£2.50) I perused the menu. Now when I reasonably muscly guy brings you to somewhere saying it does the best breakfast I was expecting something a whole lot less healthy. But this place had a really great menu for anyone wanting to eat well whilst eating out. Top marks on that front. The top of their menu says they have a clean and ethical approach to food. I was, however, feeling in need of some stodge after drinks the previous night and went for one of the more naughty things on offer, even so it was no way near unhealthy. I had the salmon option from the eggs section (£7.50) Smoked salmon, eggs, spinach, wasabi peas, water cress and sourdough bread.

My pot of chai tea arrived and was yummy, I think I got three or 4 small cups out of the pot. I really liked the little mini milk bottle the milk came in. Really cute and a nice little touch. While we waited for ours the food for the people on the table next to us arrived. Looks like they ordered the two different salad bowls the kale mallung and courgette noodles. They both looked great and substantial and I had a little food envy. But I reminded myself I needed stodge.

Mr F went for the halloumi breakfast roll (£3.80) which he happily and quietly scoffed. He enjoyed it and his coffee. Once he had finished I was shocked at the amount of yolk he left dripped on the plate! What kind of a person is he, leaving all that delicious yolk just lying there??! It’s the best bit! Can I continue to be involved with this person? Unbelievable.

My salmon and eggs was gorgeous, my poached eggs were perfectly cooked with all the white done but a runny yolk. The wasabi peas was a really interesting addition, the horseradish like flavour of the wasabi was brilliant with the salmon but mild enough for a breakfast dish. A really good idea and added interest to the dish. The sourdough was lovely. I always go for sourdough when I’m buying artisan bread. Love the sour tang it has and this was no exception. Really liked my brunch and it looked awesome on the plate as well.

Would like to come back here and try one of their salads another time. But so many cafes and so little time. At least I can pop in and eat one of them without feeling guilty for eating unhealthily. They were deffo packing a few veg portions.