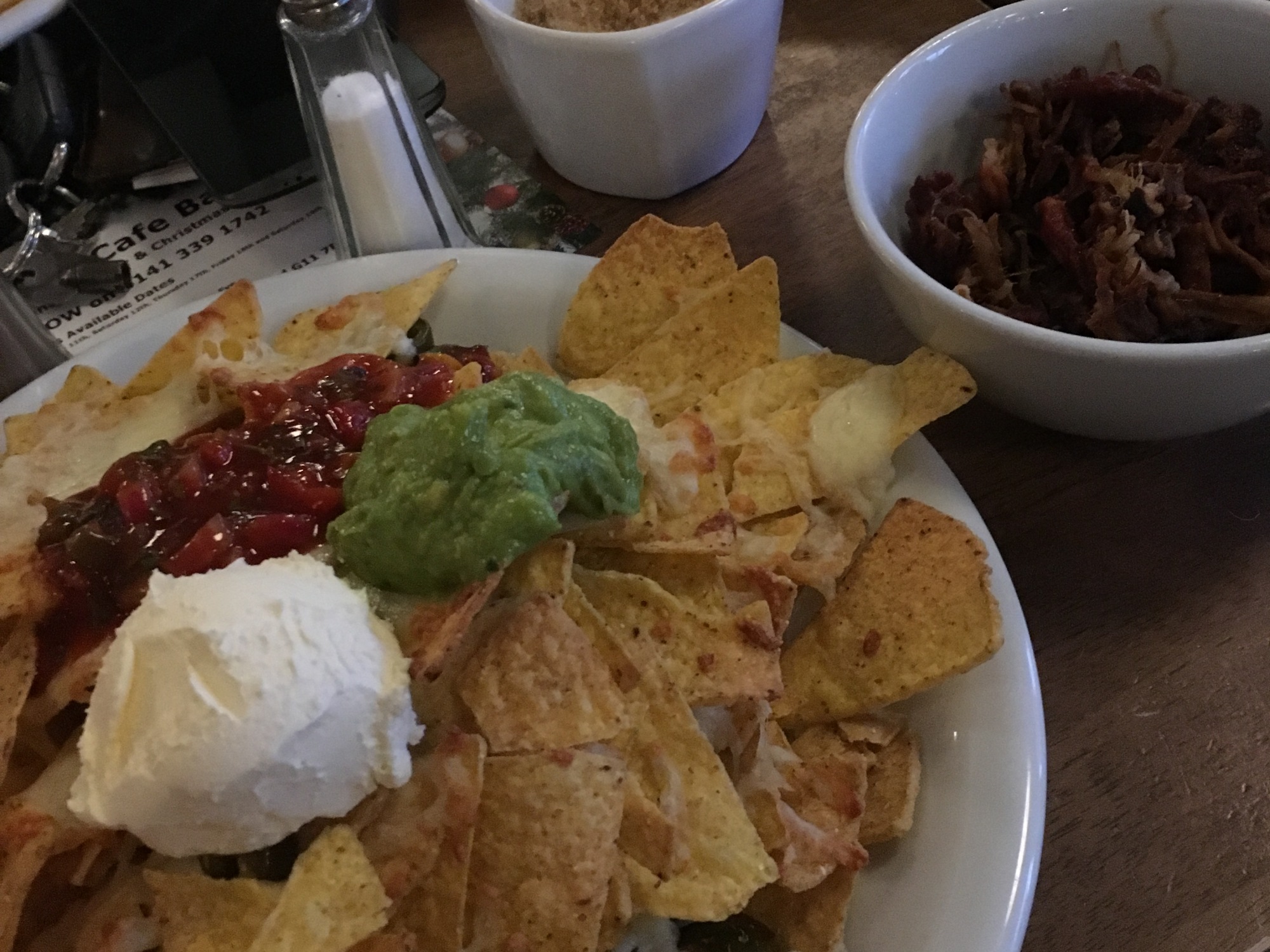 This little cafe bar at the Broomhill end of Dumbarton Road is really near my flat and is one of the few places in my immediate locality that allows dogs inside. I have to admit at this point that I love my dog more than a great deal of humans, so for me to be able to take him with me is a huge bonus from my point of view.

This review summarises two visits. One with the Fi and her fella Iain with the mutt (Smeagol, yes I am a geek) for dinner and the other with the same three plus Fi’s brother Callum and his dog Islay and another friend of ours Colin for lunch. We had just been out walking the dogs when the larger party went. The weather was horrendous, so we were all soaked and had some pretty sodden and a wee bit muddy dogs. But we were all very welcome and the staff promptly gave the dogs some water.

I also bought some Hummus for the table, largely cos I wanted some but knew I wouldn’t be able to eat the lot and the nachos myself.

The nachos were great, tonnes of cheese, tonnes of toppings. The pulled pork went really well with everything and had a delicious smoky BBQ sauce. My one tiny criticism was the salsa was almost like a sweet relish rather than a traditional salsa and I’m not sure it really fitted with my idea of nachos.

While we were having dinner Islay decided she needed to have a little bark at some guys wanting to come in. Apparently she has a tendency to treat bars and restaurants as her territory according to her master. Her and Smeagol had only met the day before and it was really cute to see Smeags, who doesn’t bark when out eating etc with me decided to echo each of Islay’s two barks in a “my new friend is barking, she needs back up, but I have no idea what I am barking for” way. Maybe you had to be there? And maybe you have to be a dog person?

The home made Hummus was, well Hummus and pretty standard. Possibly a tad on the dry side but you could really taste the tahini. The gumbo was tasty but possibly a little too homemade-esque for my liking both in flavour and presentation. I like to think when I have gone out to eat that it’s something a little more than I could have bunged together at home.

On the first visit I had sticky toffee pudding which had an amazing toffee sauce. On the second I had a hot chocolate with marshmallows and whipped cream for pudding which was filthy in a good way! Yum yum!

I feel a bit torn about reviewing this place. I am a little meh about the food but I do really like it here. The staff are lovely. The atmosphere is great, it’s really warm and cozy and they have some great entertainment. It’s a great place to come for a drink and to escape from the cold. And it’s that which I would recommend. So I am a bit stuck between the two here. Sorry guys.