Well it seems kind of compulsory to go to one of the nights for the food festival so what better to do with a day off over the easter weekend? I booked this a little while back knowing that my parents were coming for the weekend and we were looking forward to a sunny Easter afternoon at the food festival complete with crazy golf, etc. Well, the Glaswegian weather didn’t disappoint and it was miserable. As we arrived at Candleriggs not sure what to expect from the Spiegel tent I did worry that it was going to be freezing and a miserable experience. We entered the bit of derelict ground that the tent was on and saw the abandoned and rained off crazy golf and thought my worst fears had been realised until we entered the lovely cozy tent. Inside it was bustling and there was a brilliant atmosphere and some great live music going on. I am pretty sure looking round that I have been in that same tent before but at the Edinburgh festival last year. Lots of stained glass and red velvet. Lovely. There were lots of families in and there were children getting their faces painted and playing. It was a really nice easter weekend happy hidden gem away form the miserable weather outside. 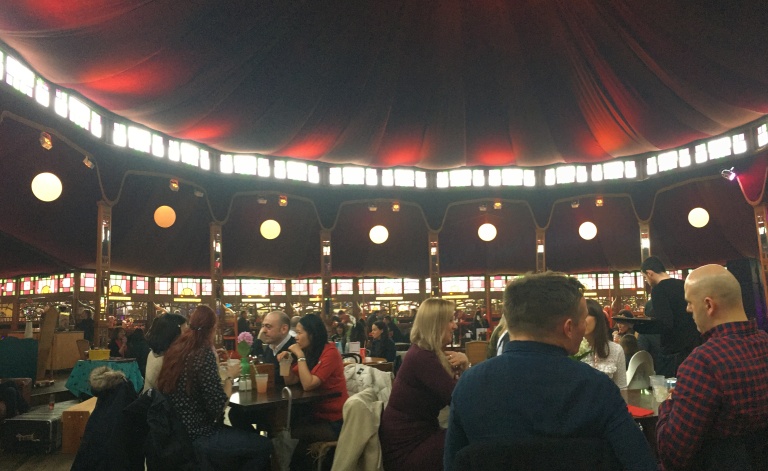 We were booked on to the secret dining event. So we had no idea who was doing the food. It turned out to be section 33. A catering/pop-up fine dining company who regularly do this kind of event although I haven’t had the pleasure of tasting any of their food before. It was £5 for a ticket to get your table reservation and we were booked in the afternoon. For our ticket price we got a drink on arrival and my mother and I both had the free cocktail, a rum and rose mallow (rum, hibiscus, guanabana, watermelon and citrus) whilst my dad had a half of lager. The cocktail was nice enough, possibly not as sweet as I would usually pick but pleasant.

The menu was simple. 6 mains (two meat, two fish, two veg) and two deserts. We ordered one of everything and shared between the three of us.

The meat dishes were venison pie with celeriac and apple (£7.50) and pork fillet char siu with stir fried greens and crisp rice noodles (£8). So starting on a high, the venison pie was my favourite of the lot (and my dads). Absolutely brilliant! Was in need of a bit of stodge and this hit the spot. The pastry was just how I like it, the venison was tender and the gravy rich. The celeriac and apple complimented it well. Really beautiful pie. The pork was probably my second favourite, the meat just melted and the fragrant start anise flavour fro the 5 spice and the soy in the sauce. Yum. Although I’m not sure the crispy noodles added anything.

The fish was salt and pepper chipirones (baby squid) with lime and squid ink (£7) and Campsie glen smoked halibut Caesar salad (£8). The salt and pepper flavour to the squid was intense, in a good way, like salt and pepper ribs and this was eased by the squid ink aioli, which just looked brilliant! Dipping your squid in something and making it so black was definitely interesting. The caesar salad was fresh and the halibut was intensely smoky but melted in your mouth like smoked salmon as it was a smoked raw halibut. My mum loved this one and it was definitely her fave. She would not stop going on about how good the halibut was.

The vegetarian dishes were wild garlic tagliatelle with mushrooms and hazelnut pesto (£6) and Charred carrots, Katie Rodgers Crowdie and baharat (£7). The tagliatelle was probably my least favourite. It did taste nice but the pasta was a little too al dente for my liking and it was just a bit too, I don’t know, basic compared to the other dishes. There were hardly any mushrooms in our portion and it was largely a small bowl of pasta with pesto which also could have done with a bit more seasoning. The carrots however were lovely,  little pricy for what it was, but lovely. The crowdie was fresh and there was a beetroot jam which was sweet and both went really well with the soft salty charred carrot. I’m not sure where the baharat was hiding as I didn’t find any of it particularly fragrant or spicy but it was very nice.

One of the things I really liked was that they were all totally different dishes and so was great to have a little bit of everything. They were of a small size but I think this was reasonable as they were not priced as a main but rather small plates.

My mum and I ordered some more cocktails, going this time for the Many Berry Caipiroska (vodka, acai, raspberry, blueberry and citrus (£6)). Again it was nice enough, tasted strong but just not as sweet as I would normally expect from a caipiroska. We listened to some more of the live music. Both of the acts that were on while we ate were really good. We were very impressed and I wish I knew who they were so that I could give them a shout out.

On to pudding, my dad is sweet enough so my mum and I shared them between the two of us. The waiter had mentioned several times how good the Chocolate Pave with banana (£6) was and we were looking forward to it. We also ordered the other option the rhubarb and custard which sounded a little boring (£6). The puddings arrived and both looked good. We tucked in to the rhubarb and custard tart, and oh my god! It was unbelievably good. One of the best puddings I have had in a while. Both my mum and I couldn’t get over how nice it was. Shame it was so small. The vanilla custard was smooth, the pastry sweet and the rhubarb tart. Just amazing. So following on from that the pave was well, ok. It was very chocolaty (a little too on the bitter dark chocolate side for me) and the whole thing was infused with the flavour of banana. But well, it was always going to struggle to live up to that tart.

Stuffed and happy, we got our bill in a quirky sardine tin and got ready to leave and brave the Glasgow weather again. I think it is safe to say we all enjoyed our experience and I am already on at someone to come with me to one of the other nights in the festival calendar. Fingers crossed.