I was treated to a trip to Fanny Trollopes by my parents for my birthday. As a single thirty-something spinster it was just me and my parents. Fanny Trollopes is a tiny little restaurant in trendy Finnieston and I had fancied giving it a try for a while. Unfortunately I hadn’t been feeling well all day before going and I thought at one point I was going to have to cancel the reservation but I made it in the end.

We were shown to one of the booths and I sat down to admire the lovely art that covers the walls. At this point, especially for a birthday meal I would have ordered some fizz, but I couldn’t face any alcohol with being poorly sick. In fact over the whole meal I drank water and about a third of a glass of red. My dad commented “you must not be feeling well if you are off the wine.”. The pictures are a little rushed as my father generally frowns upon phones at the table and huffed at my taking pics of the food and made no attempt to wait for me, but rather tucking in as soon as the plate hit the table.

We started with some of the homemade bread which was beautifully presented and was served with butter, basil oil and parmesan tuiles (£4.00). Great start. I ordered the twice baked goats cheese soufflé, with toasted pine nut and pomegranate salad (£6.50). The soufflé was light and had a strong flavour of goats cheese, the pomegranates sweetness went brilliantly with this and is a flavour combination I have used myself. I wanted to lick the bowl.

My dad had the pan seared pigeon breast with Strathdon blue cheese risotto and pickled pear (£7.50). I did really consider getting this starter myself but I was a little nervous about the blue cheese risotto as I can sometimes find it a little overpowering. I had a taste of this and it was nothing of the sort and beautifully cooked. I didn’t manage to steal any of the meat but it also looked good.

My mum had the scallops, carrot and coriander fritters with spicy peanut sauce (£9). I did manage to steal a bit of everything here. The scallops were sweet and soft and the flavoursome spicy peanut sauce didn’t overpower their delicate flavour and crisp fritters added a lovely crispness to the dish. My mum was more than pleased and raved all the way through her starting proclaiming at the end “I have to say, they were the best scallops I have had, ever!”

On to mains, I went for the fish of the day (£18) monkfish with a smoked haddock scotch egg and herb mash potato. I was sold at “scotch egg.” The mash was amazing, incredibly tasty and smooth and creamy. The scotch egg was also really nice and different being made with smoked haddock but it worked really well. Lovely. The monkfish itself was nicely cooked but slightly under seasoned for my taste, so you needed to make sure you had something else from the plate with it in each bite.

My dad had the slow braised belly of lamb, moroccan lamb parcel, sweet potato celeriac gratin and orange glazed carrots (£17.50). Again I didn’t really get to try much although I did get some of the gratin as my dad was raving about it and it was delicious, creamy and intense. Not something I have tried before and we both agreed that it’s one to have a go at at home. My dad said the dish on the whole was lovely but that the moroccan lamb parcel “Didn’t bring anything to party” and could have been left out.

Puddings are kinda compulsory when I am out with my mum. I got the Bramley apple and vanilla oatmeal crumble with cinnamon anglaise (£4) and mum had the affogato with biscotti (£4). Both were simple but nice. My mum loved the vanilla ice-cream. My crumble was a nice end to the meal and warming with the horrible weather. 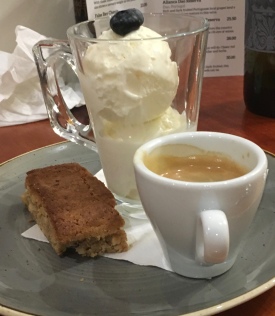 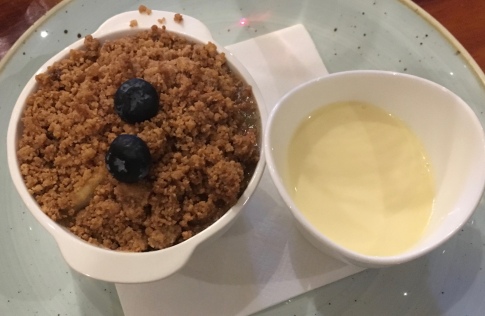 Although the presentation of the bread was brilliant the other dishes dropped down a little on minor points like drips of sauce on the side of the plate. Tiny criticism but I did notice it. The music playing while we ate was a great mix and lead to both me and my mother being told off for singing at the table by my dad. I had a lovely birthday meal here and would visit again.