So, I saw on Facebook that the Devils Deli was having a pop up £5 burger night. So how could I refuse! I went along with a guy I have been kinda on and off seeing. It was BYOB so we popped to the Polish supermarket a few doors down and got ourselves a Polish beer each.

There seemed to be quite a lot of interest on the event page so was worried that it would be rammed and I wasn’t wrong. I really liked that though, everyone squeezed in to the little place giving it a great atmosphere. We got there early, about 7, to try and avoid the crowd but I imagine it would have been busy all night. 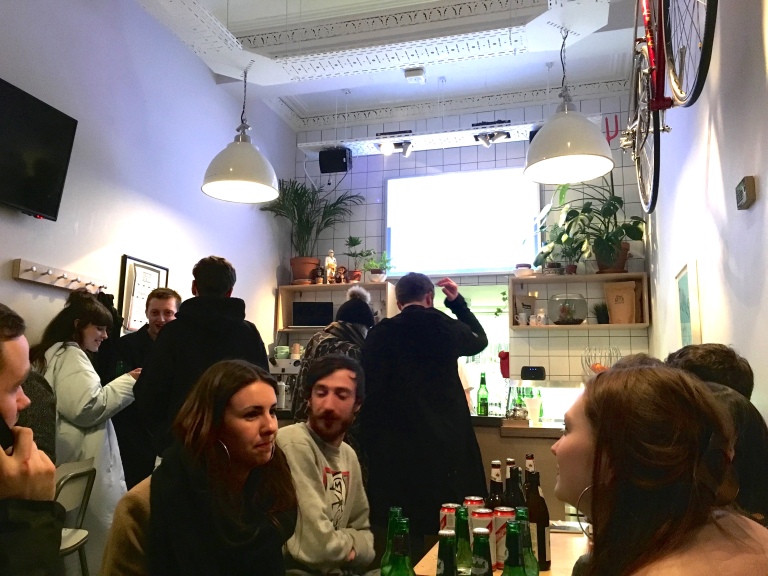 We both got different burgers, I went for the fried chicken, gravy, hash brown, cheddar and smoked garlic aioli on a brioche and he went for the Aberdeen Angus with American cheese, pickled gherkins secret sauce again on brioche. We also ordered two portions of fries (£2 each).

My burger was awesome. It was a deep fried, cheesy, artery hardening, masterpiece. The fried chicken had a lovely spicy coating which was not greasy. That mixed with the hash browns, cheese and aioli was just gorgeous!

His burger was pretty good too. The beef was pink and juicy on the inside and delicious with the chunky gherkins. His bun was sadly a bit dry and hard on the top in the mouthful I had but he certainly wasn’t bothered by it.

The chips were a bit disappointing. They were really greasy and were a little like when fries that have gone cold have been put back in the frier (I used to make fries at work as a teenager). I didn’t finish mine and probably wouldn’t order them again. This is a shame because the burger was so good.

At this point I think I should give a shout out to the Polish beer we brought with us. Brower Kormoran Witbier. It was lovely light, tangy wheat beer. I really enjoyed it. Give it a go!

Only a quick visit, we downed what was left of our beers and then left to give some of the many other people standing a seat. Would recommend their chicken burger to anyone. Lovely.